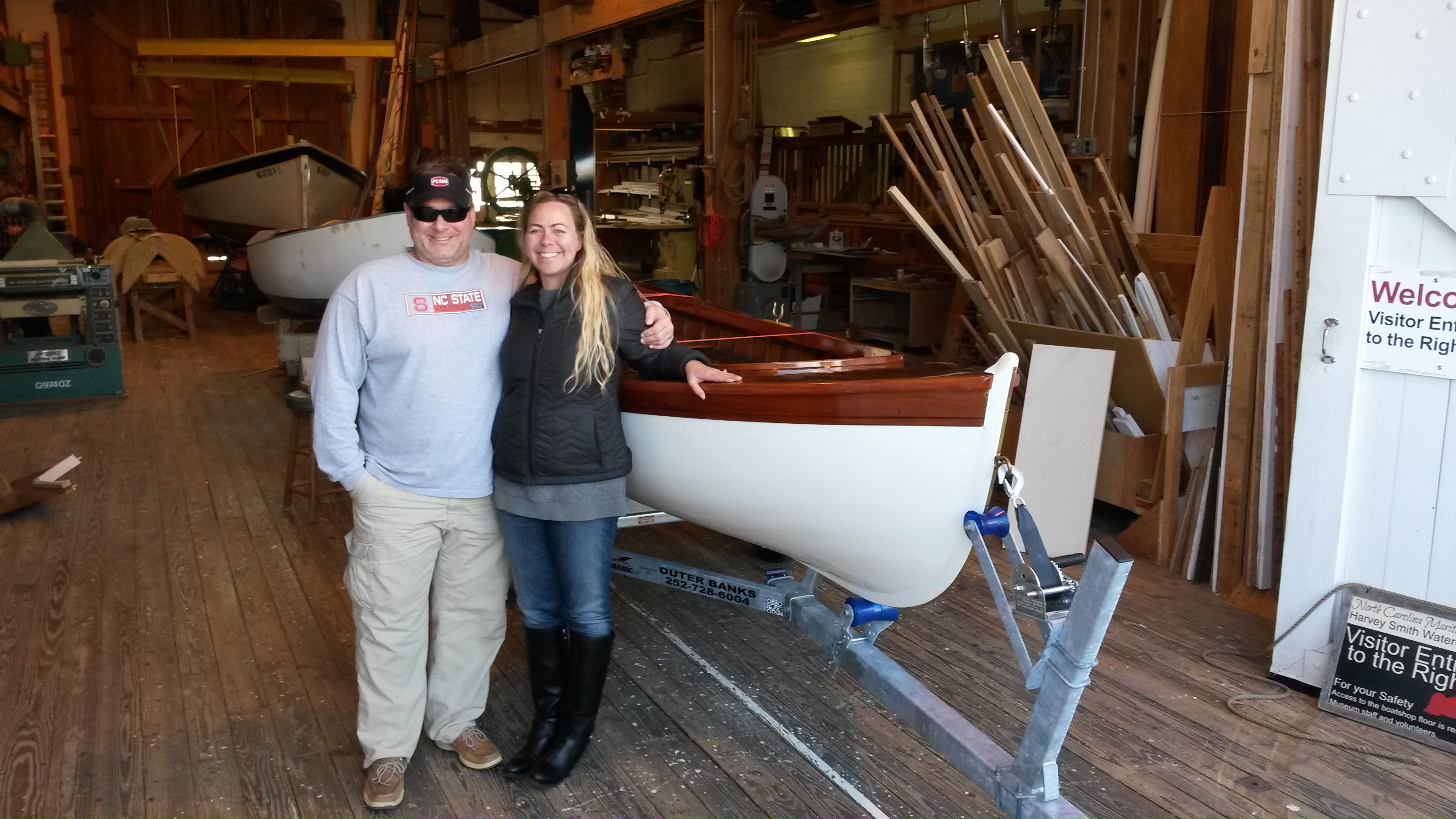 Would you spend $5 to win a 1907 tender replica from the yacht “Black Wing”? Lots of people did during the last year as they visited the North Carolina Maritime Museum in Beaufort. As with most raffles, there can only be one winner. This year, Lyn Knoke from Minnesota won the boat valued at $8,500. In addition to the 12’5” boat, the winner also received a 2014 Tohatsu 6 hp 4-Stroke motor.

The replica boat was built at the Harvey W. Smith Watercraft Center, across the street from the North Carolina Maritime Museum, by the volunteers and staff of the Museum.

Museum staff member and boat builder Tim White selected the design for the 2016 boat. “It’s the first time we had built a motor boat for the raffle,” he said. “We wanted to do something different since the staff and volunteers historically build sailboats,” stated Mr. White.

The original boat was designed and built by George Lawley &amp; Sons of Neponset, Mass. The lines where taken off the original boat from 1907, which resides at Mystic Seaport Museum and featured a 1-cylinder inboard Gasoline engine.

According to Paul Fontenoy, Museum Curator, “The build began in November 2015, from lofting to completion, and the project took approximately 400 man hours.”

WoodenBoat magazine features the replica 1907 tender in the “launching” section of their January/February 2017 issue.

“It’s a real tribute the staff and volunteers to have a boat from the Watercraft Center featured in a national publication like WoodenBoat,” stated David Cartier, public relations coordinator for the North Carolina Maritime Museums.

“We were fortunate that the assistant editor of WoodenBoat had the opportunity to see first-hand the completed replica boat during her visit to the Annual Wooden Boat Show last May,” according to Mr. Cartier.

Each year, the Friends of the North Carolina Maritime Museum raffle a boat as a fundraiser for the organization. Tickets are available throughout the year in the Museum Store and the winner is announced at the annual meeting and holiday open house hosted by the Friends organization. Ticket holders need not be present for the raffle and the winner will be notified if not in attendance.

“This year, the raffle boat generated over $10,000 to help with programs at the Watercraft Center,” stated Brent Creelman, Director of Operations for the Friends of the North Carolina Maritime Museum.

The 2017 raffle boat is currently under construction and can be seen from the viewing platform inside the Watercraft Center.

According to boat builder Tim White, “The design is cat-rigged sailboat, is a sailing vessel characterized by a single mast carried well forward (typically near its bow).

“Generally, a catboat has a light and shallow draft hull, wide beam approximately half its length, is gaff rigged, and carries a center board. The vessel is 12’ long with a 6’ beam (width).”

Tickets are available for $5 at the Museum Store inside the North Carolina Maritime Museum.